Now, what about the fear of applying for a job? Going back to school? Having a difficult conversation? Those are far from rational. The hiring manager won’t punch you in the face. Going to school isn’t going to destroy your life. Talking to someone who doesn’t like you won’t kill you either. The question we all should be asking ourselves more often is “What’s the worst thing that can happen?”

Fear kills more dreams than failure ever will.

It’s our inaction, inability to act out of fear that often holds us back from achieving our goals. Failure is never a permanent state. You may have failed but you are not a failure. What we can do best in this state of mind is to fail early and fail fast, so we can learn from our mistakes and get better with each attempt.

You’re not going to be stuck forever.

Better yet, no one is stuck forever as long as they’re trying to get unstuck. Basically, people fear of three things:

And they all have one thing in common. They lead you down the same road of paralysis and eventually destruction.

Mindlessly scrolling social media kills millions of dreams without people even realizing it.

Adults spend an average of 3 hours a day on social media – watching seemingly perfect lives of other people. That means average person will spend more than 5 years scrolling endless feeds of Facebook, Twitter and Instagram. Let that sink it for a moment. How wasteful is that giving up a huge chunk of our lives to become a fan of someone else’s life?

It’s also unfortunate to see how social media has stolen our present moments. Go to any special occasions and events and you’ll see people living on the social media, instead of living in the moment.

No one ever puts up their worst version on social media.

All day every day, people find ways to put up the best and perfect version of themselves on social media, even if it means taking a dozen photos or hiring a professional photographer. “Look at my iPhone and the amazing dress I wore to the high-end wedding last night.”

Blind yourself as if you’re a racing horse.

Horses wear blinders when they’re racing so they don’t have peripheral vision. Put your imaginary blinders to focus on the racetrack in front of you, and not get sidetracked easily in today’s increasingly noisy world.

When elephants are born into captivity, trainers control them by tying them to a tree, fence post, or anything that can hold them in place. Initially, the baby elephant would do anything he can to pull at the rope and break free. But eventually, he learns that he is essentially powerless. And in the end, the baby elephant stops pulling the rope altogether. 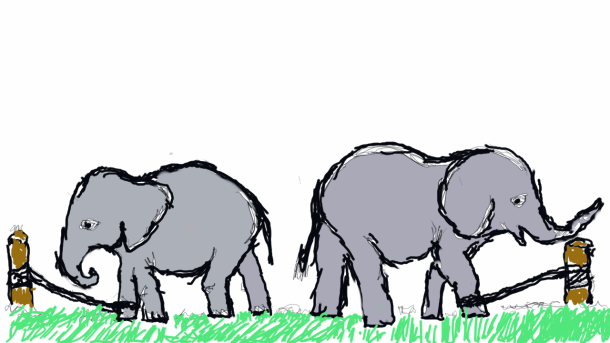 As the baby elephants grow and mature, they get so big and strong. In fact, so strong that they could lose the rope without breaking a sweat. But something crazy happens. The adult elephants don’t even bother trying. And it’s not because trainers use heavier ropes and thicker trees. In fact, trainers are able to use a smaller rope and smaller pole to keep these huge animals in place, as they grow.

Remember that elephants were not born feeling powerless. None of us are. It’s only with time that the elephants learned to feel powerless and eventually give in. Inside its mind, the elephant probably believes that it’s still stuck because for a long time, it has been conditioned to believe that way.

What’s true for elephants is also true for people. The elephant believes it’s stuck, when in reality it’s one push away from breaking free. By the same token, we sometimes think we are stuck, when in fact we are so close to our personal breakthrough.

No one beats us down as much as we do. It’s time to stop playing the tape of your failures and mistakes over and over again. You’re not who you were back then. You’re not even who you were yesterday. You’ve grown yourself in the past twenty-four hours.

Perfection is just another term for Procrastination.

If you want people to commit to themselves, commit to yourself first.

When we want something from someone, the one thing we all don’t need is an excuse. When we ask our children to make up their rooms, we always want the answer ‘yes’. When we want our co-workers to finish the project on time, we want them to comply.